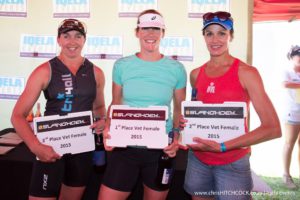 Team Tissink Kelly Van Der Toorn marked her return to form yesterday at the Slanghoek Triathlon in Cape Town with a resounding victory in the women’s race. She claimed not only the overall women’s title, but also the Veteran womens, and as it was pointed out – she beat all the Vet men to the post too ;D…

This is what she had to say:

‘This weekend saw me back in tri-action at the most picturesque race in the Western Cape, Slanghoek, in the Brede valley. I’m only just getting back into training after a bout of illness so I had no expectations. I felt surprisingly comfortable on the swim and exited the water in 4th, but overtook the other girls through transition. Out on the bike I felt fluid, strong and confident for the first time since my crash. I thought I was chasing other girls, but was actually flying solo ahead of the others. I backed up a hard bike with a reasonably solid run that placed me just ahead of the first placed vet male, and 15th over all.’