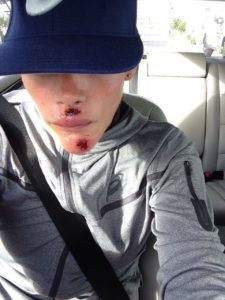 Standing still (when you just want to go).  2015 has been a challenge, two steps forward, two steps back. The first three months was spent between the dentist (repeatedly) and healing skin and ligaments in my neck and wrist. Learning to get comfortable and regain some confidence at speed on the bike. I thought I had that sussed until we hit the rough road descent at Ironman SA and my spares rattled out of the bottle cage and the TT bars dropped again. Ironman takes its toll on the body. Recovery was slower still because I lacked fitness going into the race and dug deep to finish well. Then I insisted on racing the WTS short distance event a few weeks later, which was superb fun and great to get another win. But the weather was cold and rainy, and I got a post race chill which left me with a lingering cough.

I learned to slow myself down without guilt. I learned to breathe properly. I learned to observe myself in varying states of emotion, across a spectrum from bleak despair, to defiant optimism. I found writing cathartic, releasing the pent-up frustration that comes from not being able to tick off goals as before. Sometimes we have to accept a downslide before we move forward and rebuild. I’m not getting any younger, and some days it feels like there may be no further room for improvement, and what actually IS the goal in life anyway?

Do I still enjoy racing? Is it good for ME? With so many unanswerable questions, it is actually easier to just train and not think too much.

I was lucky to spend a few weeks in June/July with my family in the UK, but travelling solo with three kids took its toll and I arrived exhausted.

I enjoyed a mixture of downtime and compromised training with friends there, some days feeling like a boss and other days feeling weak and breathless. It wasn’t perfect but was enough to line up at Ironman 70.3 Durban in reasonable shape. I had a sore throat on race day, but was overwhelmingly happy to ride my TT bike in competition, at speed, descending, without fear. That was a breakthrough. The swim and the run were side events and I was lucky to cruise without fireworks or implosions on the day.

I returned to Cape Town with another cold that hung around too long.

I had a follow up appointment with my dermatologist. As I feared, my scars were still growing – and becoming thick and raised. My top lip was pulling skew and very uneven. We discussed treatment options and agreed on a micro-needling procedure to try and break down and soften the thickened scar tissue.  Six sessions, with the first scheduled a week later.

I thought I knew pain. I ignored the pain of internal bleeding of a ruptured ectopic in 2004. In 2005, in labour with the twins, I reached 10cm dilation before being transferred to another hospital 30 mins away for a spinal block and c-section. I’ve had a gastroscopy without anaesthetic. And VO2 Max tests don’t scare me.

Well, the pain caused by needles in the area between top lip and nose is indescribably unpleasant. Tears rolled down my cheeks as I dug my fingernails into my palms and attempted to breathe like a yogi. I bled as I was supposed to. The scab formed and new skin cells improved the surface layer. As my face took trauma after monthly trauma, I picked up tonsillitis, now bronchitis. I’m no doctor but I can see the anxiety and breakdown of each treatment, is taking me to a place further from where I want to be, in spite of definite improvements in physical appearance. I don’t look as I used to….but so what. Ten years from now I won’t look the same either. But the scars should fade a little more and I’m getting to know myself better with each passing season.

I still have the hunger to train and race hard as my health allows. That’s a good thing, I’m as motivated as ever. There are no short cuts to be learned from this. I just have to ride each wave, maintain fitness when I am able to, and keep returning to square one. Wherever that is.