In Estonia, I had a somewhat lack luster swim and bike leg but was incredibly pleased with clocking the fastest run of the day against some top runners on the professional circuit. The run felt effortless. For the bike leg, there wasn’t the usual power and on reflection, partly due to limited training as my bike has had two broken forks within one month… the perils of travel and baggage handlers.

Following Estonia, I changed apartments in Cape Town and am pleased that I have again managed to get an apartment with the most perfect view of the Atlantic seaboard. For those who know Cape Town, it’s magical at sunset! I cannot believe I have now been in Cape Town for just less than three months. I have not ventured out on too many new routes in Cape Town but have started finding a few more routes where I can to really push my intervals.

At the start of the year, I had planned a European summer race program which included Challenge Geraardsbergen (Belgium) in June, and then Challenge Prague and Ironman 70.3 Estonia in late July. This was then to be closed off with Ironman 70.3 Lanzarote in the first week of September, all before my big target for the year of Ironman Taiwan in early October. I find I am more of a long-distance endurance triathlete but the shorter 70.3 distances do assist in building race technique and mental attitude.

At times I feel my middle name should be “last minute dot.com” which is not optimal when you are in both a highly competitive and stressful investment banking environment and on the professional triathlon circuit. I was finalizing and executing deals up to takeoff and that’s after finalizing the mechanics and packing a bike (now in a very hard travel case after my recent baggage handling nightmare). The European race season is great but when you fly long haul from Cape Town it does mean its multiple flights and long hours of travel. Also, with all triathlon races, they take place in the most scenic and awesome settings…. just sometimes on islands such as Lanzarote which means I had over 24 hours of travel and three flights.

On arriving in Lanzarote on Thursday evening before the Saturday race, I was fortunate to come across a bicycle store still open late into the evening (Spanish time!) and they really helped out in putting the bike back together and fine tuning it … small wins mean a lot at times.

Crashing into bed around 11pm just as it seemed the social life in Lanzarote was picking up.  I woke up to the beautiful hot weather of Spain and the warmer the better for me! I went for my usual shake out ride and headed over to Club La Santa to do a quick pre-race swim, register and race briefing. With my long haul travel, I try to have a proper shake out considering I have been in planes, taxis and airport lounges for well over 24 hours by the time I get to the race venue… I’m getting used to it but certainly not ideal to wake up on your first day at the venue and be racing the next day.

Pre-race Friday night had its own challenges with a festive island all-night party being held opposite my hotel room. I understand that in Spanish culture, fireworks are big and I can attest to that. Would have been fun other than I had a race that morning although I don’t tend to sleep well prior to a race,  I’m too excited to get going and also having tapered leading up to the race, I am not as exhausted as usual.

At Lanzarote everything is so well organized over the race weekend. It is also beautiful in a rugged barren island way. Definitely a recommend and with all the training facilities available, Lanzarote will be back on my race calendar.

On the morning of the race, after checking-in my bags, gobbling a bit of nutrition, hit my pre-race moment of reflection and was ready to race. 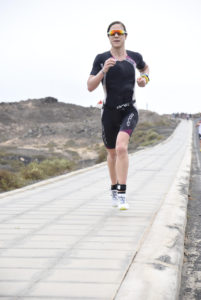 I headed alongside Anne (Haug) to the swim start. A lagoon swim in front of the resort. Did a quick 2km jog warm up, put on the wetsuit and then a quick swim warm up. With the tide, the water was very low and at some points your arms scrape the bottom of the floor which was different. The pro woman and men head out together and as always, a frenetic start with the usual pushing and shoving. As per my race plan, I went out hard and got into the leading bunch though ultimately lost contact and came out the water with the chase group. Had a quick transition and was on the bike. Again, as it was a 70.3, the race plan was to go as hard as I possibly could. Getting on to the bike I was disappointed in my power/watt numbers which were down. My quads were burning but managed to stay in sixth place. It is something, I am addressing with my Coach Raynard Tissink, in that despite an all out effort, I felt I was literally going backwards on the bike. Putting that behind me, I was here to race and never giving up.

I got to T2, dissatisfied with both my bike leg and swim leg, and in my mind I regretted that I had arrived so late in Lanzarote and I really began to think of how difficult it is to balance investment banking and pro racing. But I put that out my mind and raced through transition wanting my run to offer me redemption. It was a solid and positive run – but too little too late. In a strong field, you cannot have sub-par bike, swim or run leg.

Big congrats to Lucy Charles for pushing the pace from the start and to Anne Haug in her debut in the longer distance format. Anne’s move from short course to long course has definitely brought with it essential speed.

After the race I called Raynard and we are going to tweak a few things for the last quarter of the year. I’m taking the positives but always keen to learn, improve and push myself. Feeling my performance is well outside of what I know I am capable of.

What is always great is even though I am disappointed in my performance, I have received a number of amazing messages from friends and that inspires me.

Reading numerous articles from fellow professional athletes and various professional coaches, I have had thoughts that I may have set myself up for failure. Traveling anywhere from Cape Town, South Africa is a long haul and as I have repeatedly noted working in a the competitive investment banking industry. The pressures to fund race travel accommodation and race equipment take its toll. My days are made up of train / work / train / sleep….repeat. 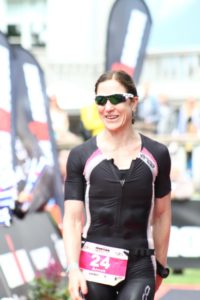 Sometimes people assume that as I race in the pro field, I must be fully sponsored. In South Africa and with our current economic environment and the need to fund athletes at grass roots levels, there is limited to no real funding for triathletes. Particularly when compared to the massive team sports South Africa is so well known for such as football, rugby and cricket.

I have seen how the true professional (and by professional – I mean the person that gets paid to train and race only) can train, rest and recover far quicker than those of us juggling day jobs and training. I can only imagine the quantum improvements achievable when you have rested and recovered.

However, “there are many paths to success…realizing that frees you to move fast and get things done in the best way you can”. My journey is unique and I am excited that even with challenges, I am also incredibly fortunate to get to choose this life and get to race against the best in the world.

My work ethic, tenacity and consistency will pay off and each race has given me a lesson. and made me a better version of myself every day.

Thank you to everyone for your support. You all know who you are!

I am so proud to be ambassador to Team Tissink, Garmin South Africa, GU Energy, Fluidlines and as of this month – Nelson Mandela Bay, Proud Host City of the IRONMAN 70.3 World Championship 2018 City Ambassador.

World Champs in South Africa…. couldn’t get a better venue! 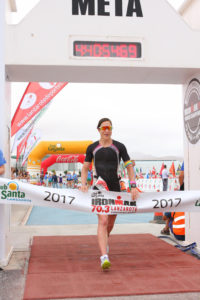 Happy training to you all. May the challenges you face make you stronger, be a better person, a more  complete athlete… and most of all, stop and experience the pure joy of getting every little bit out of life that you can.