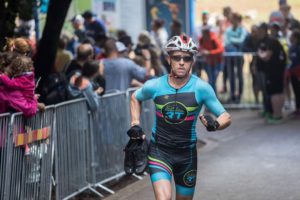 I arrived in Pula on the Thursday before the race, the race was not really in my plan until a work commitment in Croatia was confirmed towards the end of July. I’d been training consistently since Durban and IMSA before that, but once the race was confirmed, the training program got stepped up. Training had been going really well up in the build up to Pula, FTP tests, 5k trials, and even the 1,500m swim wetsuit swims all indicated that the consistent training was starting to really pay of. Two weeks before the race I had a last minute business trip to Turkey which was disruptive based on all sorts of logistics challenges, delayed flights, missed connecting flights, lost luggage, poor sleep, etc, but I was able to mentally get past that.

The weather forecast was not great according to a fellow South African I met on the plane into Pula, I don’t generally bother with weather forecasts,  again not much you can do about it, and its going to be the same for everyone, so what’s the point?

On the Friday I went for a ride to make sure there were no issues with the bike, followed by a short run off the bike, legs felt good!. I then had a bite to eat, and went down to the swim start to do a swim, ended up swimming to the first buoy, which was 700m out, so was a longer swim than I planned, but the water was so clear and warm, that the swim felt so easy. There was a rope which connected all the smaller buoys, which was lying on the ocean floor, and the water was so clear it meant I didn’t even need to sight, just had to follow the line on the ocean floor!

That night I made sure I had an early night, which after the traveling this week and last was not difficult. After a solid 9 hours sleep I went out for another short bike ride, and then ended up doing a brick run to make it the race briefing on time! Post race briefing did another short swim, practicing the fast start which Natalie recommended to incorporate into the race plan. Arms felt good aswell!

Bike check in was subsequently cancelled on the Saturday based on forecasted thunder showers, so spent the afternoon getting the transition bags packed, and relaxing. Had another great meal in a local restaurant (Tuna steak and grilled vegetables), which is generally my pre-race supper. Early night, ran through the race in my mind a few times, and started making a mental note of the fellow age groupers who I would need to look out for if I wanted a shot at a slot. There were about 10 of them who based on past performances, had been faster than me. I guess the big guns had either just competed in Chattanooga, or were readying themselves for Kona!

We arrived at the start post bike checkin, and the sea was not looking as inviting as it had been the previous days, it was clear the organizers were trying to alter the course to make use of more protected water, possibly by even shortening the course, but eventually an announcement was made that the swim was to be cancelled. Disappointing, but again, same for everyone, and if anything probably gave me a slight advantage.

I met up with Claudia and Brandon at what was the new bike start, it was on a first come first serve basis, so placed myself right up front, fake it till you make it right. Athletes were set off 5 seconds apart, and I was off. The bike course was really beautiful, the road surface was mainly good, and it was really fast until we went through sections of old villages where there were really sharp turns, I emerged from the first hairpin bend with a bit less tread on my tyres, and brief taste of hospital food in my mouth, and decided to take the reminder of the turns more conservatively, fortunately I hadn’t needed to test my travel insurance cover, but it was close, and a reminder to stay focused.

When the swim was cancelled I’d switched to the Duathlon profile on my Garmin, I hadn’t used this profile before, and for some reason it gave my distance in miles, just shows, don’t do things in a race you haven’t done in training. Any way it gave me power and heart rate which is all I was really interested in anyway. I was watching 3s average power like an uber driver watches his smart phone, and felt I’d probably been averaging around 220W. Some of the hills I was hitting higher power numbers, but I was consciously trying to keep the watts below 240-250, even on the hills and even though the legs felt strong, I still had along way to go. By 60km in I was really happy with where my heart rate was, and had even  started passing a few of the cyclists who had come speeding past me on some of the hills early on, which is always motivating. Nutrition plan had worked well, it was my first race where I’d relied exclusively on gels and 32GI/High 5, normally I ate bars, which always worked for me, but they are not easy to chew. I took what I though was High 5 at the 2nd last aid station, but it was only water! So I took my emergency high caffeine gel for good measure, and binned the water.

With approximately 5km’s to go I was holding myself back on the bike, legs still felt strong, but HR was creeping above 155, possibly also because of the last gel I swallowed!

T2 was not as slick as I’d rehearsed in my mind, I left my garmin on the bike, and just before exiting transition realized when I wanted to start the run timer – fortunately I hadn’t left T2 so I could run back and get it, really didn’t feel like taking my body through hell on the run without instruments!

Starting the run the sun was out in full force, and predictably I was running around 4:15’s/km, I had to keep pulling back, and eventually settled into a rhythm on 4:30’s exactly as planned. Heart rate was where I wanted it aswell at around 157bpm. I wont say 4:30/km felt comfortable, but it felt manageable. The first 10km took us into the city centre, heart rate by this time was around 167, and maintaining 4:30 was starting to hurt. The race organizers had also deemed it unnecessary to supply cold water (there was plenty of warm water…) at the aid stations, but devastatingly there was also no coke which I planned to fuel from 5k’s into the run. Once in the city centre we had to complete two 5.5km loops, in the absence of coke I’d started hydrating on Red Bull, i’d also packed two high caffeine power gels into the back of my race bib, again for emergencies, and the first gel went down the hatch. At the first turnaround I got my first band, so I was about 13km in at this point.  I was down to my last couple of matches at this stage! Crowd support was great as we wound our way through the old town, getting our second glimpse of the Arena which housed the finish line.

By the time I got to the turnaround for the 2nd time, I had approximately 3km to go, this is where I’d resolved to go all in, heart rate around 178 at this point, and I was burning my last few matches two at a time until they burnt my fingers! The last km was around 4:25, but felt like 4:00, and at the very last steep little climb into the arena I was redlining at 186bpm. Fellow South African Gordon Graham welcomed me in, and so I ended my near text book race. My garmin gave me a time of 4:23, I was very happy, I knew I had basically stuck to my race plan, and that I’d gone all in, if that wasn’t good enough for a slot, it wasn’t because of lack of effort on race day, but because I needed more time following a structured program.

Looking at the results website, I wasn’t sure I had done enough to get a slot, it appeared I had come 14th in the category, but it showed a swim time ..? I went to the slot allocation ceremony still holding onto hope that I might sneak in via a roll down. There were 6 slots in the 35-39 category, and we got another slot when one of the other categories slot was not allocated, so there were now 7 slots up for grabs. Not everyone elected to take their slot in my category, and with one slot remaining they called my name, amen brother, I was going to take it!