In a league of his own – Superpiet

Home » Featured » In a league of his own – Superpiet 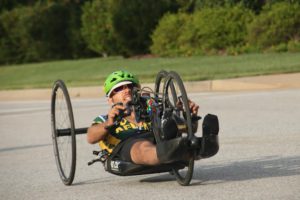 After having a dream year in my sporting career in 2014 it was difficult to imagine that I could have an even better one but I have been blessed with incredible performances in 2015 and am on my way to actually topping 2014.

Started off the year with a couple of minor races and solid performances at the National Championships which was important to get me in the SA teams to compete overseas and then at the end of April the serious racing started at Padova marathon in Italy. At this stage, every marathon I do a am chasing the world record, but unfortunately at this one the weather did not play along and although it was actually a really solid time of 2h29min in the conditions it was disappointing nevertheless I blew away the rest of my competition.

Next up was 3 athletics meets and a Swiss Paracycling World Cup in Switzerland. In ended up being one of my most successful trips of my life. In the first week I raced in 17 races on the track with distances ranging from 100m all the way through to the 10 000m. I have to race the sprints even though I am more of an endurance animal reason being that for Rio 2016, it is only the 100m and 400m that is available for my disability class. I managed to break 5 African records in the 200m, 400m, 800m, 1500m and 5 000m. And then amazingly in the very last race of the 17, in extremely hot and windy conditions, I went on and smashed the 10 000m world record by 19sec! And I guess I have to thank my competition and good friend who held the record for saying the right/wrong things to fuel my fire and taking the record down. So although the planned marathon World Record did not work out for me the month before, it is funny how things sometimes end up and I am really blessed.

The following week I had to switch over to cycling to compete in the Paracycling World Cup in Yverdon, Switzerland. And the form continued as I won the Time Trial in a world best ever average speed for my class of 27.91km/h which is just insane to think of with the muscle function I do have.  I doubled up my performance by winning the road race the following day wearing my Rainbow Jersey very proudly in an International race and it was a fairy tale ending to a 2.5 weeks of racing.

Back home it would be 7 weeks from Cycling World Champs and a lot of hard work lying ahead. Not only on the bike, but unfortunately also in my actual day job as an Actuarial Analyst at Deloitte.  The course at World Champs was a hilly one so coach Ray and I worked hard on building my power and strength on the hills and I got my PBs on my hill interval down to times I never thought would be possible. It was a tough 6 week period with training 2 sessions every morning going to work between 11 and 12, getting back home around 8pm….eating and sleeping again. But from such great support from my wife, my work colleagues and Deloitte, who also sponsors me, it is amazing how much is possible. So race week arrived for World champs in Switzerland and unfortunately my wife could not join me on the trip but I was lucky to be able to take my Ironman Wingman with me, Walter Lutsch who knows all the ins and outs of racing and travelling with me. Because of my performances earlier in the year and Rainbow Jersey status, I was  definitely the marked man at World Champs. This of course creates a lot of unconscious stress which I don’t think I had, but then you do. Time trial day arrived and although I would not say it was my best Time Trial, I was definitely firing at 99% and managed to kill the opposition and become Time Trial World Champion. But the job as not done as it was important for me to make sure I take the double this year.  Road race day arrived and amazingly, while warming up, 5 minutes before being called for the race, my wife arrived to come and witness something special hopefully and needless to say up the stress levels a little bit to make sure I perform!  It was perfect weather conditions for us Quads and the race started with a bang as a young Swiss rider fired away immediately and had a gap of about 150m  after the first kilometre. I decided to stay calm and real him in slowly and make sure I just catch him before the first long climb. Our hill work definitely paid off as I dropped him on the climb and made a gap of about 13 secs but the elastic had not snapped so I knew I had to take some risk going down the downhill into the corners. By the time I finished my first lap, the lap had increased to 30secs and I knew now I just have to keep my rhythm. Amazingly it ended up being a race for 2nd and 3rd place as I was just in class of my own on the day ending up World Champion in the Road Race for the second year in a row beating the nearest rival by 7min35sec.

A big thanks to coach Ray as clearly what we did paid off so the year is not finished, amazingly. So next up is a World Cup in our very own South Africa where I will very proudly wear the RainbowJerseys in both the Time Trial and Road Race. Although my foucs has shifted back to the racing chair where I will attempt a World Record in the marathon in Berlin end of September 2 weeks after the World Cup in Pietermaritzburg. From there I will hopefully compete in Athletics World Champs in Doha, end of October and then race another marathon in Japan, end of November. And then I am still toying with this crazy idea in my mind of taking on  my third Ironman WA but will see how the wheel turns.

Just a big thanks for all the support from everyone and also well done to all the Team Tissink athletes who have been rocking out incredible performances in 2015. For those going to Kona, good luck, I am sure you are going to do even better than expected!