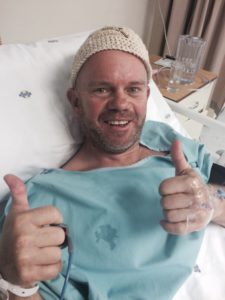 So after 2 weeks forced rest after IMSA due a chest infection I decided that Monday 13th April would be my first day of training for Challenge Roth on 12th July. (which happens to be on my 42nd birthday) I packed my training kit out and headed to bed at 9pm on the Sunday night having set my alarm for 04:15 for Monday morning. Welcome back to the grind.

At around 22h30 I woke up with what I thought was restless leg syndrome and went to the bathroom. I struggled to put my right foot down on the floor and my leg started trembling. I tried to force it down and my whole right side went numb. Panicking I called out to my wife Renate as I was losing control. Renate rushed into the bathroom just as my body was heading into a seizure, I was having a stroke. Renate placed me on my side on the floor so as to avoid swallowing my tongue. My eyes had rolled back and the right side of my face was drooping. She pressed the panic button to call our armed response and then also phoned them to send a paramedic as well. She remained calm and collected the whole way through this drama.

An ambulance was dispatched after the paramedic stabilised me in the bathroom and we were on our way to the Linmed Hospital within an hour. Once at the hospital and after a CAT scan it was established that I had a brain tumor that was bigger than a golf ball. The tumor was situated in the front left of my brain but had not penetrated the brain and was not cancerous that they could see. I was admitted to hospital and a craniotomy was scheduled for Thursday 16th April. The whole tumor was removed in a 6hr operation. I spent a day in ICU and a day in general ward and was allowed to come home on Saturday. The road to recovery has officially started. The neurosurgeon has said that my strength and fitness levels have definitely worked in my favour.

After a follow up with the neurosurgeon today (Wed 22nd) he has confirmed that the tumor was benign and that they managed to remove all the tumor. I have to take it easy for the next few weeks but should make a full recovery. To think that if this has happened two weeks earlier it would have been at Ironman in PE. I am overwhelmed by the support and love I have received from friends, family and fellow athletes. Thank you to everyone that sent wishes. The last week and a half has been mind blowing (no pun intended). Apparently I have had the tumor for about 15 years and it has slowly grown bigger every year.

The plan is still to get to the start line in Roth, but we will be taking baby steps. For now I am just happy to be alive 🙂