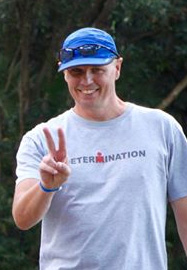 Sometime in mid 2014, a group of us sitting around decided that we should do some Triathlons overseas each year. This came about as a certain sports body in SA did not support it own athletes much, so we decided – what-the-hell, if we are going to pay for it, we may as well choose where we want to holiday and do our sports events! So, after some research (by myself – as I specifically wanted to choose a relatively flat 70.3 course!) we decided on doing Ironman 70.3 Budapest in 2015.

We originally thought we would only be a group of 6 or 8 friends all going together to Budapest, but in the end, we grew to a party of 22 people who travelled to Budapest. Of the 22, I think only 4 were not actually competing in the event.

Coming back to me specifically, I absolutely hated this triathlon thing! I had previously completed 2 Ironman 70.3 events in East London, and can honestly say I never enjoyed it and found myself having a stern talk to myself on the last one about ever doing another 70.3 event! (So, this is why I got to choose the new event!)

When I consider the amount of training I put in for this event in Budapest compared to the training I did for the events in East London – I actually realise that I just turned up and raced the East London events with absolutely no training at all!

So, the one thing I was definitely going to do different going to Budapest, was TRAIN!!! I enlisted with Team Tissink  and was assisted by Natalie for this adventure. I must say that having a training schedule and knowing that you have someone checking on you definitely made me train for this event. Also, participating in the training camp in Port Elizabeth was great as working on the ground with Natalie and Raynard helps one tremendously – one learns so much from them.

Participating in the Ironman 70.3 Budapest is an absolute blast! Starting from the way the event is organised through to how it is run is an absolute great experience! The EXPO is also great – you have a great variety to choose from – something I wish we could see in South Africa.

The event itself was held in a beautiful scenic city! The swim – for me for once was much better than I had ever done before (maybe all that swimming Natalie made me do had something to do with it), and it felt great coming out of the water not feeling that I had donated half of my lungs to the effort! The bike leg was absolutely stunning – passing through many beautiful and historic parts of the city!!! Probably one of the most beautiful sights was climbing up to the Castle area (a short sharp climb) and then being able to look out over the Danube and beautiful city – although there was not much time to dwell on the view – as bike times were fast and furious. The run was equally beautiful, allowing us to run along the banks of the beautiful river – with thousands of people and fans supporting you and cheering you on.

Thanks to the training and support from Natalie and Team Tissink, I am happy to say I still managed a personal best of 5:48 – even though I was still contending with a calf injury.

When I look back at this, the thing that jumps out at me is the friends that joined us on this trip, the laughs and the experiences we had together – oh yes, and also that these 70.3 events are a little easier if you train quite a bit!!!

I definitely would recommend you going to Budapest to do their Ironman 70.3 – it is a well organised and run event in a beautiful and historic city, which is completely affordable! – Oh, and take along some great friends – it always makes for good fun!

Thank you so much to Natalie and the Tissink Academy for the training and guidance which helped make this experience an enjoyable one!!!!