Coming Back in China – Caroline Koll 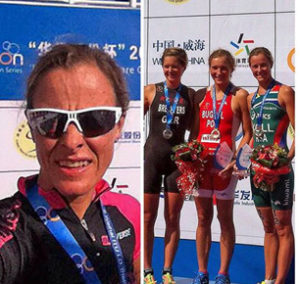 There has never been a doubt in my mind, that whenever I have been dealt an extended period of bad luck, challenge or whatever you may call it, there is always hope, because I know it must, and it will change. The bronze medal that I achieved in Weihai last week was not necessarily my best performance, but above all it meant that the tide had changed for me and that counts for more than anything!2015 has probably been the most challenging year of my career – I had everything thrown at me, health issues, injuries and emotional moments. Sometimes, as athletes we consider ourselves invincible. We have a high capacity for ignoring pain and fatigue, everything is cast aside for the sake of the goal.

Towards the end of 2014, I did a lot, and, a lot of things happened to my body. On reflection – Physically,  I sprained an ankle stepping off a sidewalk, I was bitten by a spider, I tripped while running and fractured a rib, and I developed an allergic reaction on the other ankle and then of course the accident a week before IMSA which resulted in a broken scapula, muscle tears, displaced vertebrae and a stuffed up neck. On the personal side, I was trying to run my design business, develop the sports clothing side,break even, study for my pilots exams, complete my pilot training, as well as train my body for competitive triathlon! Like most busy women, I always felt like I was letting someone down and I felt guilty for not making everyone happy! I felt stretched, tired and worn out – how could this be possible when I have friends who work regular jobs, have 3 kids and still train?? The truth is, the support offered to sportswomen in South Africa (and many other countries) is so scarce that for the most part the ‘Professional’ or ‘Elite’ women are in fact doing a million things to keep their heads above water, with the exception of those who may be fortunate enough to have parental financial support, which means that for the most part, I don’t think any of us ever arrives at an event well rested without the infamous ‘To Do” list buzzing around in their heads.

The problem with ‘Superwoman’ , is that while in her mind she can cope with everything, eventually there is a breaking point. Even now I find it unacceptable to admit to any weakness, but eventually my body did. Since the beginning of the year, even though I was training well, my form just declined and even ‘rest’ did not help. I felt constantly exhausted, I could sleep at any minute if time allowed, I would get dizzy, my blood pressure was really low and even normal daily activities required monumental strength. Eventually, after the horrid month of March, where I witnessed my friend Linda lose her cling on life, and a mere 4 days later I found myself lying injured in hospital, I had to put out the stop sign on myself and realise that I couldn’t control everything.

Initial blood tests showed the all clear (for all those who think as a Vegetarian I must have low iron – to the contrary it was nearly too much!), and the Doc claimed to find nothing wrong with me. As an athlete this is the worst diagnosis you can get as you know your body really well, and this sort of answer makes you doubt yourself! My advice – keep searching until you do find the answer! Without all the boring details, it was eventually found that I was suffering from an Adrenal condition – my adrenal glands had been so overworked with all these aforementioned ‘stressors’ that eventually they were unable to produce cortisol, which, essentially is the anti-dote for the adrenaline which is released everytime your body is affected by what it perceives to be a danger (stress). The essence is that my body became permanently flooded with adrenaline and was unable to restore the stats quo  after the ‘fight or flight’ stage. Athletically, this means that I was constantly affected by a raised heart rate (something your body does if it senses danger), and without the cortisol needed to counter it, I was left exhausted by my body’s constantly ‘alert’ state. With chemical solutions being not recommended (they can cause your adrenal glands to ‘forget’ to produce altogether), the only solution was to rest. With my broken bones trying to heal, the timing was ideal. I resigned myself to the fact that I would not be racing for a little while – what is the point of racing anyway when you are running on half the capacity?? Interestingly, I slept a lot, and exercise consisted of walking the fur kids! I also confess to indulging in a fair amount of chocolate (very good for the soul)

It could have been classed as a depressing time, especially as my bike (uninsured) was pretty much destroyed. This was actually a good thing, and it gave me permission to rebuild at a slow pace rather than the usual ‘Let’s see how quickly I can get back into training’ syndrome. Special and I decided that I would ride again once we got to France in July. With the help of friend, and bike mechanic Paul, I managed to build up an old frame and with my friend Tristan’s wheels in France I was set to go. It was wonderful being back in my favourite French countryside to train, and even though I was rather unfit, I would take part in a OD race almost every weekend. Although some of you may have seen these race results on FB, it was essentially a ‘tri’ training session – with some podium finishes, even though I felt I didn’t deserve it! I absolutely love racing in France, and it has just what I needed – fun :D!

Onwards to last weekend. Racing in China came as a last minute decision – I did not feel that I had gotten back up to the level of training needed just to finish the race, nevermind be competitive! It was the memories of this fantastic race that drew me to compete again, with no pressure, just to have fun and enjoy this beautiful part of China again! It was great to see my old friend Ewa from Poland again, and even though we were strictly speaking competitors in the same race, it felt like a weekend away with the girls! With everything being so last minute, I was quite ill-equipped for the race – my second-hand mish mash bike had a few problems on arrival, but luckily the great Chinese mechanic managed to cross the language barrier and find some replacements for damaged screws. The guys from Irwin wheels also desperately tried to find a decent set of wheels for me to use the day before my departure, but obviously we were a bit short of time…thanks for trying guys!

In the end, it didn’t matter. I just wanted to go out there and race again, good or bad, but just race! The result is obviously clear from the picture – I got the bronze, behind Ewa and Carina from Germany! Even though I felt I did not have the perfect race, the most important is that I was soooo happy just to be able to do what I did :).

I wish to thank the LOC of the ITU Weihai race, the SUPER volunteers, the fantastic staff of the Haidu Hotel and the awesome people of Weihai! Most of all thank you to Special and all my friends for always supporting me. #Adidaseyewear ; #Minopex ; #Inverse Teams