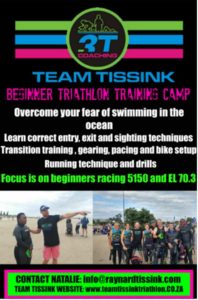 We are running a 2 day training camp for any beginner triathletes wanting to race the 5150 or 70.3 events.

The camp will be run over the 6th and 7th of October in Port Elizabeth.

Here is a tentative schedule for the camp:

The camp will be limited to 20 athletes.

COST: R850/person for the weekend’s camp.

A bit about Team Tissink:

Team Tissink Coaching Academy is run exclusively by Raynard and Natalie Tissink, who jointly have more than 45 years of triathlon and swim coaching and racing experience.

Based in the Ironman city of Port Elizabeth, South Africa – Raynard and Natalie help athletes achieve their goals of crossing the Ironman finish line and hearing the words ‘You are an Ironman’

Both Raynard and Natalie have raced around the World and know what it takes to perform at the highest level. They have competed and excelled in all distances of the sport.

Their focuses now is on coaching swimming and triathlon, and have built up a successful coaching academy in South Africa. They limit their Coaching Academy to 80 athletes around SA and Internationally.

Raynard started competing in triathlons at the age of 16. He was successful from the start and immediately became hooked onto this challenging multi-disciplined sport. He achieved success in all distances of the race, with numerous SA titles from Sprint Distance, Olympic, Half Ironman, and Ultra to Ironman distances.

His 1st Ironman was the Ironman South Africa event in Gordon’s Bay in 2000, where he finished 10th.

From there he went on to Malaysia in 2001 and finished in 3rd place.

In his 4th Ironman in Korea, he took his first Ironman win and went on to compete in 33 Ironman events.

Natalie has been at Raynard’s side since 1994. They were married in 1996 and their children, Kade and Jordi, were been fortunate enough to share a lot of the journey with them.

Natalie has been involved in competitive sport since the age of 6 and achieved the following: