Accidents and other lemons…

Home » Featured » Accidents and other lemons… 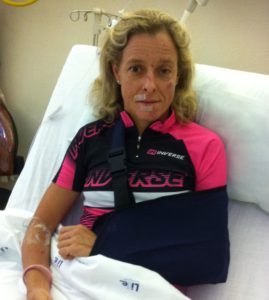 For the first time in a decade I wasn’t on the beach for the start of Ironman South Africa last weekend. Last week was the cherry on the cake of what has been a disasterous tri season so far – on Tuesday I was involved in an accident on my bike. A commuter was travelling on the wrong side of the road in the opposite direction to myself. As the distance between us was shortening, I could see that he was not paying attention and realised that I would have to move to my right (and into the middle of the lane) in order to avoid him. The said commuter then looked up at the last moment, hesitated, panicked and instead of moving off the road, he moved to his left, into the middle of the lane. The resulting head on collision was really hard, as he was travelling slightly downhill and going really fast. I remember little, except the instinct that kicked in – I immediately jumped up and dragged myself to the side of the road where I was at least safe from the traffic!

Special, who was 2-3 metres behind me, managed to avoid the collision and immediately set about trying to stop the traffic and alert the emergency services. Although I could not see him, the commuter was lying unconscious in the road (he was not wearing a helmet) and his heavy bicycle was broken in half. At first with the adrenalin levels soaring, I thought that I was fine, and then I started to experience terrible pain in my upper back, right arm and neck. Luckily, a paramedic on his way to work stopped at the scene and the ambulance arrived really quickly. Once at the Glynnwood  hospital, the pain really set in and it really hurt! The doctors were concerned about my back and I was speedily  sent off for x-rays. The verdict – broken left scapula (apparently a very hard bone to break!) and a displaced vertebrae. Don’t get me wrong, I am grateful as I know that is could have been worse (as we always say), but at the same time, this could have all not happened if someone had regulated his stupidity a bit better…

In addition, as a result of all these lemons that have occurred since November last year (broke a rib after tripping and falling while running, then got an allergic reaction to an insect bite of my ankle, then the horrendous accidents of 2015…), my adrenal glands have taken a knock. Generally brought on by a variety of stresses, the adrenal glands go into a state of constant overdrive until they can no longer cope and are no longer able to produce the necessary hormones (like Cortisol) which balances stress levels and the thyroid. This then also causes blood pressure to become really low (after my accident it was as low as 85/60!). The result is inevitable – chronic tiredness, lethargy and dizziness from low BP, poor performance etc.. I have to admit that I have felt these symptoms for some time. I knew something was wrong but couldn’t explain it better than losing 10sec per 400m running on the track! Rest did not help, I was not over trained and regular blood tests revealed that all the usual suspects were completely normal…in short, I was told everything was fine! Athletes know their bodies better than their cars, and I can advise anybody to keep searching for the answer – it is never your imagination! I was fortunate to come into contact with Dr. Andrew Holgreaves, who immediately assessed that I was not a neurotic, hypochondriac athlete and that there was a very real problem. We have since been working on getting my adrenals working again, and with my favourite physio, Dr Linda Steyn getting the broken bone and muscles healed up as fast as possible

And so, while it has not been a good start to racing in 2015, I have been forced to take a step back and look after the machine that is my body! I think by the time I am physically strong again, I will be chomping at the bit to race again…watch this space ;D