After an unscheduled dose of the H1N1 swine-flu virus, 5 weeks before camp, I was apprehensive about how my immune system would cope with three full-on days of training load. I needn’t have worried- Natalie and Raynard have been working with me for five seasons now, and know when to push forward and when to hold back. For me, the camp would be about absorbing as much information about the course and potential changes of conditions, rather than taking my fitness to a new level.

The team dinner, at Bocadillos, (sponsored by Rencor Engineering and Promac Paints) was a chance to catch up with old friends. Team Tissink have a core group of athletes in Port Elizabeth but also coach athletes from out of town. I’d traveled by car from Cape Town with my local Tri Club MSM mate Christelle, (who was clearly eager to learn from the best!!)

Natalie gave a brief run down of the weekend plans, and we were treated to a thought provoking short presentation by Wesley Kew about the power of training your thoughts, in essence learning to control the controllable and speaking to yourself with confidence, belief and positivity. 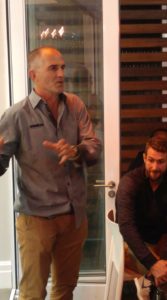 Ironman SA race director Paul Wolff gave us a pre-pre-race briefing – the biggest difference being that we could actually pay attention this time, as we weren’t sitting with jittery butterflies and adrenaline blocking our ears!  Paul also came to our first beach swim, to offer some tips regarding sighting, typical rip currents, and how the buoys would be set out on race day accordingly.

With information overload, full tummies, and an early start the next morning, we set out our kit, bikes and double alarms, ready for a bike – swim – run day.

Maitland hill repeats did not disappoint.  The predicted 40k/h wind arrived early.  Each climb was a chance to figure the best race day gearing, each descent was more about finding the least bumpy line and building confidence at speed.  The road surface was better than I remember but I guarantee some bottles will be flying! 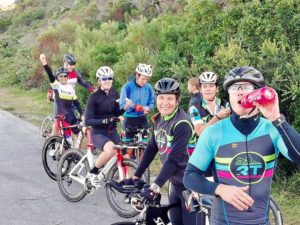 Social as always, the coaches joined us for a coffee and breakfast after the ride,  at Grass Roof (thanks Dou!) and we managed a brief nap before meeting at Kings Beach for a sea swim.  Raynard and Natalie organised most of the athletes into a repeated ins-and-outs session, entering and exiting the ocean, while some of us had a longer out and back swim.  We may not have spotted dolphins (or the scarier things) but were treated to a cool rainbow which landed at Hobie Pier. Straight from the swim, and now in the rain, we swapped wetsuits for running gear and took an easy run around one lap of the course. The pace may have been chilled, but the short incline at each turnaround was enough to raise my heart rate…note to self on race day, save some matches for the run!!

Day 2 started dark and early, in order to avoid the SA half marathon runners, meeting at Virgin Active and riding a full loop of the bike course with some LT intervals.  The support vehicles with Natalie, Gareth, Neylese and Deidre and family made on-course refreshment and encouragement a breeze, and actually now I think about it the wind was barely noticeable.  A quick change into running shoes and we finished with a race pace 5k brick, which some of us may have overcooked a bit…will we ever learn?! 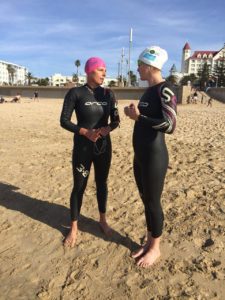 Fatigue kicked in and the air temperature dropped later in the afternoon when we regrouped for another swim. Slightly less enthusiasm when the water temperature feels like Cape Town cold!! Nonetheless- some of the more hardcore, yes, you Salome, managed a longer swim by wearing gloves to prevent hands freezing.  We can’t say how cold it will be on race day, but getting a chill while training will definitely slow down recovery and potentially reduce ones immune system.

The day was marred by an unseen theft from the Tissink bus, a sad reminder that as chilled as the vibe is in PE, one needs to be constantly vigilant.  The bus is the hub of activity, with cool drinks, keys and clothing being put in and taken out,  so somewhere along the line, someone else took advantage and walked off with Natalie’s bag. 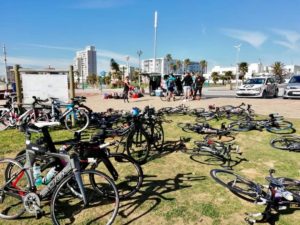 A few of the athletes staying in the Summerstrand area met for an impromptu last supper, to fuel for day 3.  The banter gets better the more we hang out, John McKay. I can neither confirm or deny rumors of Wakaberry.

Christelle and I loaded the car early as we needed to finish the bike-run and hit the road back to Cape Town.  The bike was supposed to be chilled.  It was a very low heart-rate chilled according to speedy Seegers (that’s Jeren, not Jeroen) who was ahead of the main group after the turnaround, when he moved into the kerb to allow a car to pass…and hit a bump in the road, ending his camp in an ambulance.  Once again, the support crew were super organized- Natalie and Ray never appear to be flustered, and Jeren’s rivals most probably cursed to hear he’ll still be good for Worlds in 5 weeks time.

The camp ended with a hill reps long run, but by the time I rolled in from crash support duty, I’d lost a bit of va va voom- and opted for a 5k brick, postponing my long run for the next day.  Due to my calm, low heart rate, go on feel approach, I’ve slipped into the following week’s training with minimal tiredness, but World Champs focus so much clearer in my head.  Brilliant – I’m in control.