It has become quite apparent that I enjoy racing in winter and the Durban 70.3. Three Durban 70.3’s, three age group wins and three, second place finishes. The season has been a rough one but with huge learning curves. The buildup to Durban was far from fabulous, more missed sessions than ever before, numbers so low that I would win every limbo party and running was more of a chore that hurt than something of a strength. 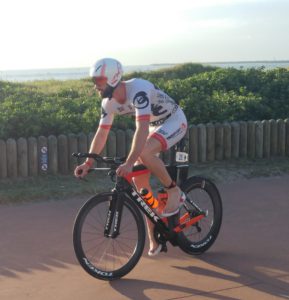 I approached this race differently to the others. Saturday night attending to an important SA vs France rugby fixture and a late dinner. I had a full contingent of family supporting which was awesome but came with loads of good quality abuse about my tightie whitie and being one of the least cool triathletes. I received a message on Saturday evening: “Don’t overthink anything just execute like it’s a great training day”. That could not have been truer and my mind replayed it over and over, this was how the day was executed.

For the first time, Sunday morning was all unexplainable nerves, inability to consume the quantities of food I am used too, a sleepless night and a mind running rampant. A morning open water swim is always the best way to start a day and what a day this turned out to be. The conditions were perfect and ………once I got underway the nerves left and the not so pretty swim stroke made its way through the ocean.

The bike was interesting as keeping an eye on the wind direction meant I had to play it smart. Gave up on trying to worry about the numbers and decided to just make sure that guys in front never got too far away, except Olivier – needed binoculars to keep him in sight. Rolling into transition in a position I had never been before was the massive confidence boost I needed.

Hitting the run like the Khoisan on the hunt was the way to go. Having no idea just how far Olivier was ahead I 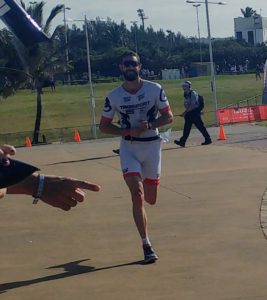 thought to myself, just go for it, although paying for it in the last few km’s!!! Realising he was so far ahead I explained in passing how I take my coffee so I consolidated my position and ran it home.

Well done to all those that competed, certainly was not the easiest of days. Whether good, average or ugly take out the positives, forget the negatives and build on from there.

Lastly, the thank you’s. The support out there was incredible if you didn’t seem them, they made sure you heard them. Thanks to the Tissink’s, once again having to put up with my lacklustre moods and getting me into the form required to execute and to Troisport, who just go out of their way to make sure everything is on point. 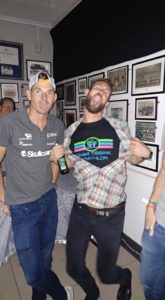