A superb come back race for James Welsh – Dbn 70.3 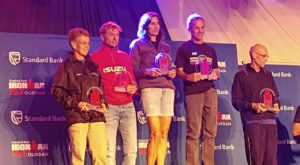 Durban in many respects is a world class 70.3 triathlon venue. It has a fantastic bike course which is closed to vehicles with a mostly very smooth tar surface and some suggestions of hills thrown in to keep you honest. The run course is flat on the well manicured promenade but this all comes at a price and that is in dealing with the temperamental ocean.

There are two options for the sea swim, either swim from the race site and risk the possible cancellation of the swim as per last year due to big surf and rip currents, or split T1  and T2 by moving the swim down the promenade a few kilometres to the shelter of the harbour where the conditions are milder and less risky. This option incorporates a 600m long T1 transition due to the narrow promenade followed by an approximately 4km neutral zone cruse along the promenade before you can start riding for real. It’s different and it does work but definitely requires different tactics and transition skills. No passing is allowed in the neutral zone so a lot of time can be lost or gained here depending on what sort of bunch you find yourself in or even better if you find yourself on your own you can close the gap to faster swimmers ahead.

This year they did split T1 and T2 and decided to split the portable loos between the two transitions as well which resulted on a delayed start as 3000 participants waited for their chance in one of the about 10  loos available. The wait did give us plenty opportunity to contemplate the 600m long transition and work out the bare foot or cleat shoe run conundrum. My feet don’t like being naked so I opted for the cleat run which worked fine as I am used to it and I would probably take that option again.

Unlike the day before where the surf was pretty choppy and the Indian Ocean was showing off its swell, we had perfect conditions with the water temp at 21.5 degrees.

This race marked my return to ironman branded racing after the broken bones of last year and whilst I felt totally prepared for the race I was a bit nervous as I cant get out the back of my mind the harsh reality of how easy it is to mess up in this sport, so if anything I tried to keep concentrating and to keep it safe. 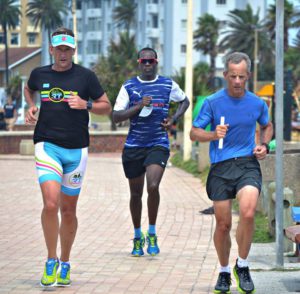 The bike course is busy for the 30 something minute swimmers but this keeps you focused and the course has enough variation to help time pass quite quickly so the turn around at Ballito comes pretty rapidly and the return to the Sun Coast Casino and T2 soon appears within site. Off the bike and onto the run was seamless and once again all the brick sessions done in preparation made the transition from bike to run feel completely natural.

The run course is very busy with athletes going both ways and not much to separate you. The supporters are ever present never allowing you to feel alone and thanks especially to the hard working Team Tissink support crew lead by none other than pro Annah Watkinson kept us all on the move. 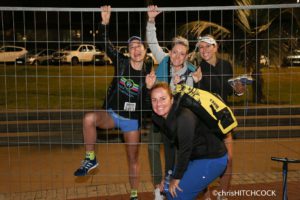 Its an impressive run route and very well supported with excellent drinks tables and volunteers. The course loops past the iconic Moses Mabhida stadium twice and  on the last lap you pass the stadium in the last kilometre and then branch off for the finishing shoot and the very busy finish line where I hear as I cross the line the race announcer noting another Team Tissink finisher and that Raynard Tissink would be very pleased as another one of his athletes crosses the line…indeed.

It was a great day of racing in perfect conditions with Jeren Seegers notably coming in second in the whole field to an ex French pro and doing Team Tissink proud and of course numerous other Team Tissink members were making the podiums across the age groups. I was particularly happy to have had a good race and managed to outrun my competition and was rewarded with a slot at the 70.3 world champs in Port Elizabeth September 2018.